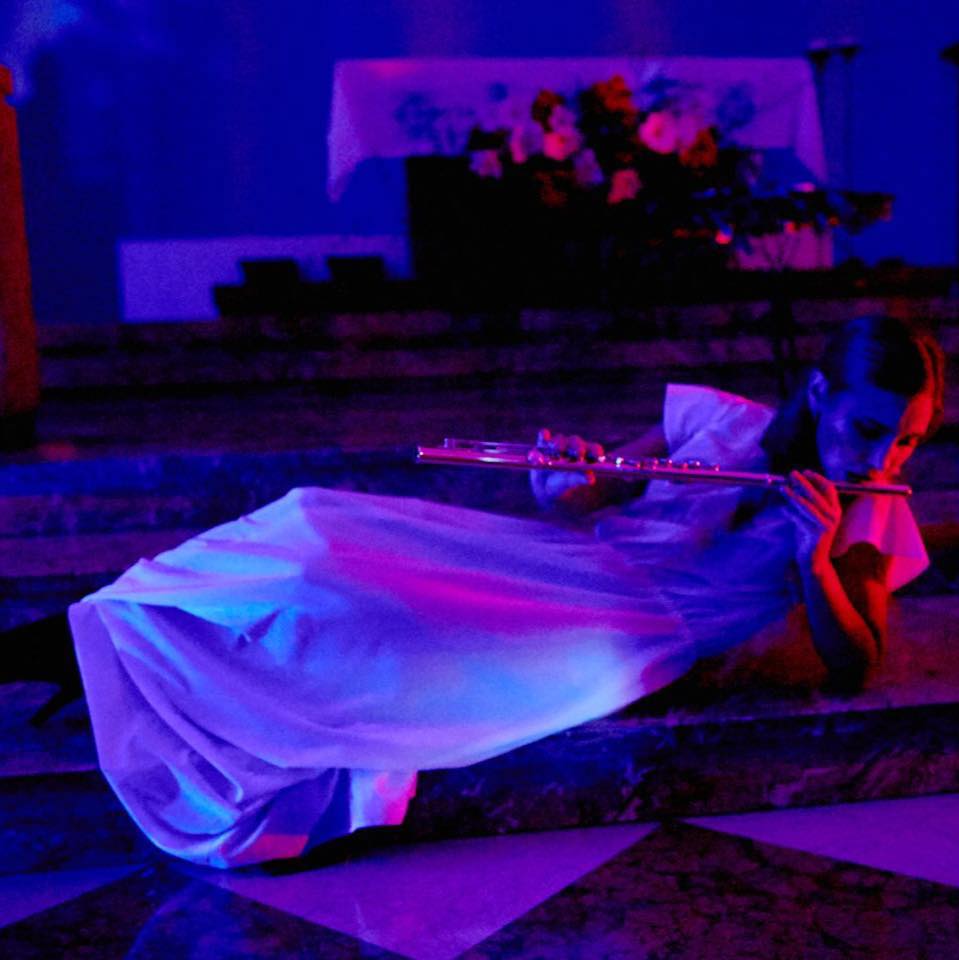 Show produced by Canone Inverso with the support of Milan Municipality n.3, in the Church of San Giovanni in Laterano, “Monteverdi 450” Festival (2017) and sponsored by SIMC – Italian Society of Contemporary Music as part of the project “Monteverdi and contemporary music “.

A new version of the project was created in 2019 in the spaces of Villa Ghirlanda Silva in Cinisello Balsamo, for Percorsi … 2019 Festival, adapting the format of the performance to the external and internal environments of the villa, in accordance with the municipal directives for the use of space.

The performance is conceived as a sound dramatization that develops along four stations that are simultaneously acoustic, emotional and physical, site specific environments.
By positioning a different instrumentation in relation to the place (San Giovanni in Laterano church in Milan 2017 and Villa Ghirlanda in Cinisello Balsamo, 2019), the artists create a sound and timbral spatialization to read again and recompose Claudio Monteverdi’s masterpiece “Lamento d’Arianna”. This aria, divided into four sections and the only residual part of the lost score of the Monteverdia melodrama “Arianna”, is considered one of the highest outcomes of the declaimed air form used by the composer from Cremona who was born 450 years ago.
Ariadne’s Lament becomes a work on the “plasticity” of the timbres of modern instruments and a game of refractions between these sound sources and the surrounding environment. The different sections of the piece allow to create an ambivalent relationship between the musicians and the audience in the room who, with their own listening and emotional feedback, will shape the performance. This potential, this seductive premise of the possibility of mutual transformation is the aim of the performance.
Although starting from a notation of many centuries ago it still resonates. The four stations acquire the name in relation to the corresponding sections of the Monteverdi air text, although they will follow one another in a different order from the original, to better enhance the new dramatization and without interruption to not break the fluidity of the performance.

Both for the idea of creating an extemporaneous sound performance in close relationship with the public and the space, as for the strongly narrative nature of the original material, that is the myth of Ariadne reworked by Claudio Monteverdi, the project evidently lends itself to a further passage, towards a more complete scenic performance, in line with the most innovative trends in theatre and performance art. Not yet a play, but a dramatization that takes into account and rework in a coherent whole: 1) the sound dramaturgy already existing in the Monteverdi score, 2) the site specific installation possibilities offered by the beautiful space of the church of San Giovanni in Laterano and 3) the possibility for the musicians to approach physical movements as actors and to impersonate some of the characters (Arianna, flute; Teseo, trumpet).

The way Arianna’s lament – the only preserved scene from Monteverdi’s lost opera “Arianna” – has come to us, has the ancient charm of an archaeological find, which survived the fury of time by chance, but was completely undone by everything around it.

Therefore the piece contains thematic elements relating to the main character, Arianna, that can clearly be deduced from the original text – abandonment, despair, unfulfilled trust placed in the beloved and yet the sense of possession towards him, the different fate that sees as losers those who love and winners those who do not love – and in addition a series of esoteric, “hidden” thematic ideas: the deception by Teseo, who leaves Arianna in her sleep on the island of Naxos, and Arianna waking up, finding herself alone surrounded by the sea; the antithetical relationships between characters, the astute Ariadne who saves Theseus from the labyrinth with the famous ball / thread and Theseus who does not save the naive Ariadne; Ariadne who betrays her father Minos and is however betrayed by Theseus; the theme of the labyrinth itself, antecedent in the plot, but very present in the lament, as a mental labyrinth of the protagonist’s despair; above all, Arianna’s need for relief (e chi volete voi che mi conforte), for a solution to pain that in Monteverdi is no longer present because the whole play has been lost, a pain that therefore lends itself to a broader (metaphysical?) interpretation.

The theme of the labyrinth, in particular, is the one that most effectively summarizes Ariadne’s lament in an image, as her mental process, of initiation to overcome the pain and maturation towards an adult sentimental awareness. Also, it has a strong ritual component, as the entry into it produces the sense of self-loss and the return to light, the exit is a new birth. So the labyrinth becomes the new scenic environment, in which to immerse the public too: by performing the scenic action in a church, a sacred place, however, the religious reference had to be destabilized and covered. So the space of movement for everyone is a labyrinthine one, suggested by the arrangement of the benches. The church is well suited to host this labyrinth / installation, the result of a reuse of its furnishings, for its modern, linear, imposing and rather rough modern Doric style which, together with the recently painted cerulean vault, recalls the Hellenic world linked to myth. The performance path is conceived diagonally, offset from the central crucifix and directed towards the niche on the left, strongly characterized by a massive architrave that almost recalls a portal. The lights – led and colored floor lamps – suggest spaces for action, in the dark-light alternation and colors (the reference to the blue of the sea that Arianna looks disconsolate is a must).
The diagonal performative axis forces the public – while free to move in the central labyrinthine space – towards the left niche, chosen as the site of action for the square portico structure (actually dedicated to containing confessionals), as it refers to another great artist of modernity strongly influenced by the figure of Ariadne, a must reference for the mise en espace of this project between ancient and contemporary, that is Giorgio De Chirico. The architecture of San Giovanni in Laterano refers in fact to the smooth and melancholy architectures of the painter, who had cherished the character of the abandoned girl so much to portray her very often as a statue lying waiting, restless and alone in a too large and empty space, filled only with pure classical architectures, among which the arcades dominate at dusk.
(Below: De Chirico, Arianna) (Laura Faoro, flute / Arianna San Giovanni in Laterano, 2017)

From a musical point of view, the proposed stage rendition takes into account the dramaturgical elements already present in the Monteverdi’s air. A careful analysis of the score clearly shows the importance of the text and its contents with respect to the melody, which bends to the word to better describe it, going beyond a temporal dimension rigidly enclosed in bars, but proceeding more by adding or subtracting a basic rhythmic unit which – in an incredibly modern way – bends to the reasons of the verse. Even the same characters, Arianna and Teseo, are “called” with musical “formulas”, identified by specific pitches and intervals whose recursion leaves no doubt about their metalinguistic function. The mode is predominant, according to an immediate logic that uses the major to identify, for example, the serenity of the successful Theseus and the minor to underline Ariadne’s desperation (B-C-C, B G#: et io crendo qui). Equally the rhythm plays with the text, proceeding through decreases, alliterations and continuous variations, in order to emotionally translate the meaning of the words and their pathos (for example the clouds rendered with syncopes or the winds with a flurry of sixteenths). From this Monteverdian substratum that binds sounds and words, the moving performance of the musicians starts.

In this project the role of the interpreter musician is transcended and loses the bridles of written music. Its aim is to investigate the possibilities of a new creation, in the areas of underground experimentation and on the border between the academic and non-academic world, so that musicians become directors of musical events and scenically structured design thinking, starting from the deep research of the electro-acoustic possibilities of their instruments as well as from the experiences gained in the context of contemporary music.