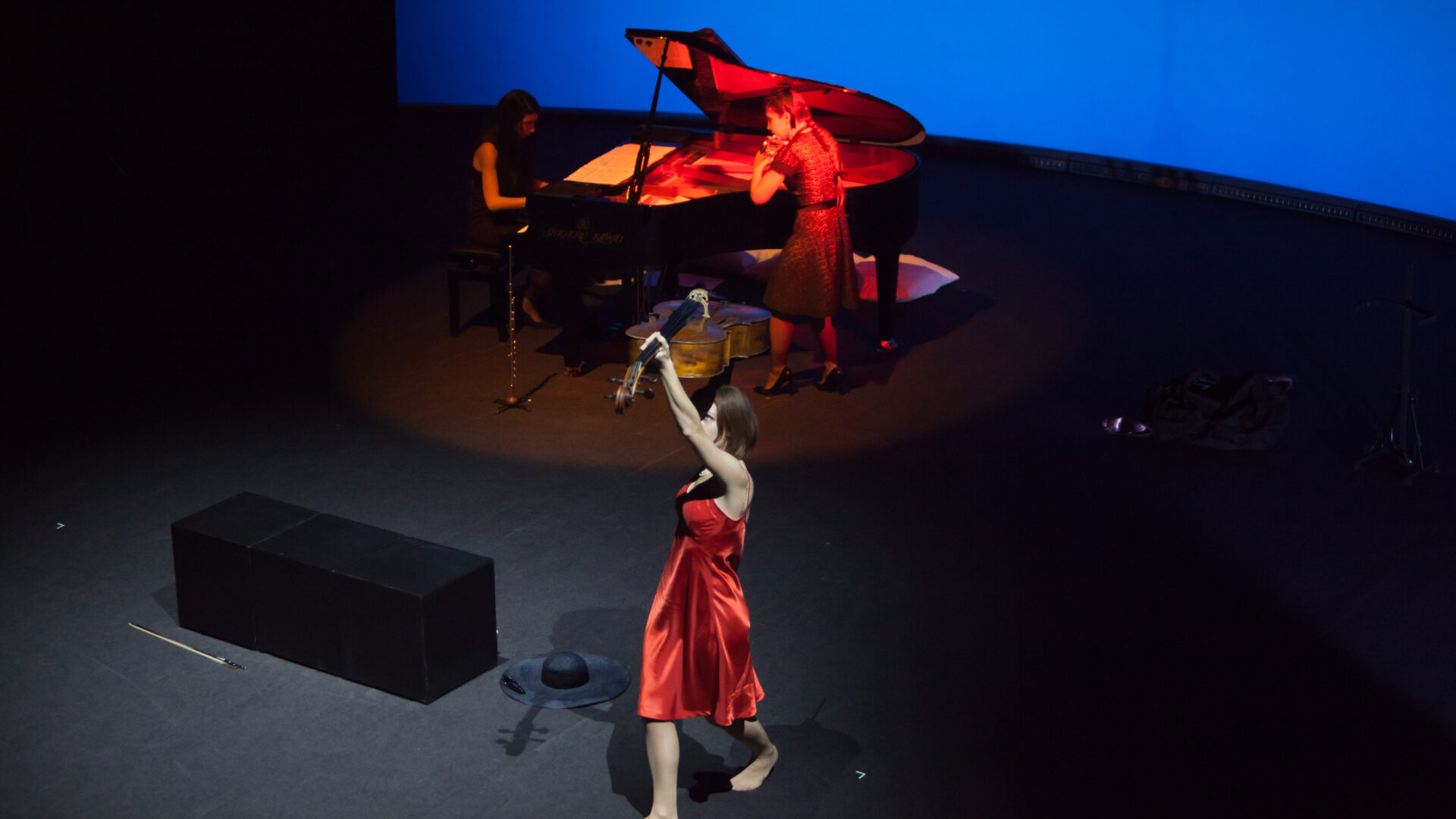 The Merry Wives of William

The show “The Merry Wives of William” is a funny and surreal English comedy that combines a plot with a brilliant Anglo-Saxon verve; scenes, characters and texts taken from W. Shakespeare’s Works and Sonnets and contemporary musical language, with three musicians on stage.

*Laura Faoro (flutist and actress) in this play is involved as Juliet, one of the main three characters

In The Merry Wives of William, three widows meet on the anniversary of the death of their beloved man. They are three “women” very important in his life: his wife, and we know for sure that he had one; his lover and, even if we don’t know, we can suspect that loyalty was not one of his gifts; a character, or rather the female character par excellence, who has become the emblem of his dramaturgy, Juliet. Fate brings them together in a tragic moment: they are mourning their dead, beloved man and want to commit suicide. But the story takes a strange turn when they discover that it is not only pain that unites them: it is also the man they lost, the same, William! Pain turns into anger, despair into complicity: hovering between madness and reality, the three women take a path of “consolation”, alternating laughter and crying, in a succession of comic-surreal scenes in which some of the most famous pages of the Bard are evoked and proposed (from Romeo and Juliet, to Macbeth, to Othello to the Sonnets), to celebrate, with notes and words, the actuality of the Shakespearean genius.

Playing on the title of one of the most famous Shakespearean comedies, Laura Pasetti stages an experimental show combining theater and music, merging the seventeenth-century Shakespeare language with contemporary classical music in a powerful blend of pure british comedy and instrumental virtuosity. Drawing inspiration from mime, gramelot, “commedia dell’arte” and contemporary instrumental techniques, director Pasetti immerses three musicians in theatrical art with British humour, in a surreal divertissement, a candy box of experiments in a fresh and captivating key. The three protagonists move within surreal situations in independent scenes that, at the same time, are intertwined with others through music. Music in this show, is not a simple accompaniment or a melody on the margins. It is the protagonist together with the word and marks the dramaturgical path of the characters and situations. The notes give body to words and sometimes replace them by stimulating the viewer’s imagination.
The composer Andreoni explains: “I chose to start from the slow solemnity of a melody by Dowland, contemporary of the Bard, to build the musical soundscape of the piece: connotative miniatures connected to the dramaturgical situations, created around the rhythm of the Shakespearean verse, to be played in situations of posture, light and psycho-physical effort (also very “uncomfortable”), but always adhering to the character and mood of each character”.
THE MUSICAL AND PERFORMANCE RESEARCH WORK:

The musical and performative research work of the three musicians/actresses has been focused in integrating Andreoni’s music within their own character and instrument, connecting notes to gestures, movements and acting, exploiting the suggestions offered by the contemporary techniques emphasized in a dramatic key. A source of inspiration has been Stockhausen research and works, training for example, unusual playing postures and circular movements to spatialize the sound (for example the flute played lying on the floor), or altering usual techniques with those of another former instrument (for example the cello played as a lute). Moreover, rhythmical and dynamic effects created with voice are often used during the show to create a surreal soundscape, but always as an acoustic performance, like a chamber concert.

“I had an experiment in mind: I wanted to create a sound bridge that would allow Shakespeare to arrive at multiple levels and from various angles. I was especially interested in the relationship between notes and words, between lyrics and verses. Creating musical situations that could “play” Shakespeare’s words and at the same time slide the words into music as if it were a natural process.
I already knew the three musicians for a previous show created together and I knew that they were crazy enough to accept … The most difficult part would have been the theatrical one: I didn’t ask them only to play and interpret the music, which they knew how to do very well … but to turn into ” actresses “, to” recite “, and not just any text … but the verses of the Bard!
They have been very brave. They threw themselves headlong into the adventure with the right dose of unconsciousness essential for such an experiment, but also with unconditional trust and I thank them for this from my heart. Nothing would have been possible without these two basic ingredients. I certainly didn’t expect them to turn into actresses after a month of rehearsal.
I wanted them to experience “saying” as intensely as “playing” and I wanted that their voice, their authenticity as people and artists gave body to these three women on stage with taste, fun and great simplicity. We did theater exercises, vocal exercises and improvisation … And I often thought of Tadeusz Kantor and his wonderful experiments where he staged musicians! There is a kind of magic that occurs in someone who does something for the first time not because of their profession, but because they want to, especially if they are someone who strongly believes in the power of art and who already works with art. It is a matter of changing the key to open the same door, it is about facing the unknown with that inner light that comes from the certainty that what animates you will take over and is not mere curiosity, it is instinct, it is blood, it is desire. The uncertainty of pronunciation or the awkwardness of a gesture is forgiven this process, because one reads further. The result is three extraordinary musicians who launch themselves with the trapeze by attempting somersaults with very difficult characters. The power of speech and music prevails, which like two huge wings save them every time from the risks they are taking”.

“I dealt with the composition of the music for this theatrical work encouraged by some factors that, during the course of the work, proved to be more and more authentic and consistent to exceed expectations: first of all the determination, seriousness, skill and propensity to risk both of the performers / co-authors and the director / author. Secondly, I felt involved in the project by virtue of a common love for Shakespeare, for theater and music; shared interest in the incessant search for sound and movement, physical gesture and musical gesture, non-traditional forms of performance interaction, forms of learning not limited to mnemonic exercise. The personal interest in a non-univocal relationship of music with the text, with the acting, with the sound and rhythm of the English language, the narrative processes, the body, the memory. Compared to my other musical theater works, it immediately intrigued me to be able to collaborate with demanding and scrupulous artists who are also resistant to long exhausting rehearsal sessions, capable of never losing a drop of enthusiasm: cultured, prepared and disciplined as pure chamber musicians , but also endowed with critical ability, creativity, boldness and acting flexibility.
The eleven pieces that have gradually emerged needed a common thread connected to some Shakespearean musical archetype, but minimal enough to guarantee easy exits to the languages of new music and equally comfortable returns if the dramaturgical architecture required it. I chose to the melody of the song “Time stands still” by John Dowland, coeval and friend of Shakespeare.
On the threshold of that slow solemnity, beyond which time stops, I glimpsed a possible pacification to the inner torment of the three widows in love, an almost inevitable solution to their drama. From those notes came the sound of each musical episode, thanks to the dramatic and psychological implications that gradually reveal themselves to the public and the characters themselves: the outburst of anger, envy, melancholy, desire, sighs, hysteria, rejection or acceptance of reality, competition, contempt and at the same time the mutual support of the three unbearable, adorable, irresistible lovers of William. The context suggested short pieces, clearly connoted, not impossible to memorize and to play in “uncomfortable” posture, light and psycho-physical effort. Each of these miniatures, nourished and guided by the Shakespearean verses in the original language, tries to bend the “textures” and the melodic, harmonic, rhythmic, metric, tonal or dynamic material to each character of the three musicians, through their most evident technical and expressive qualities”.