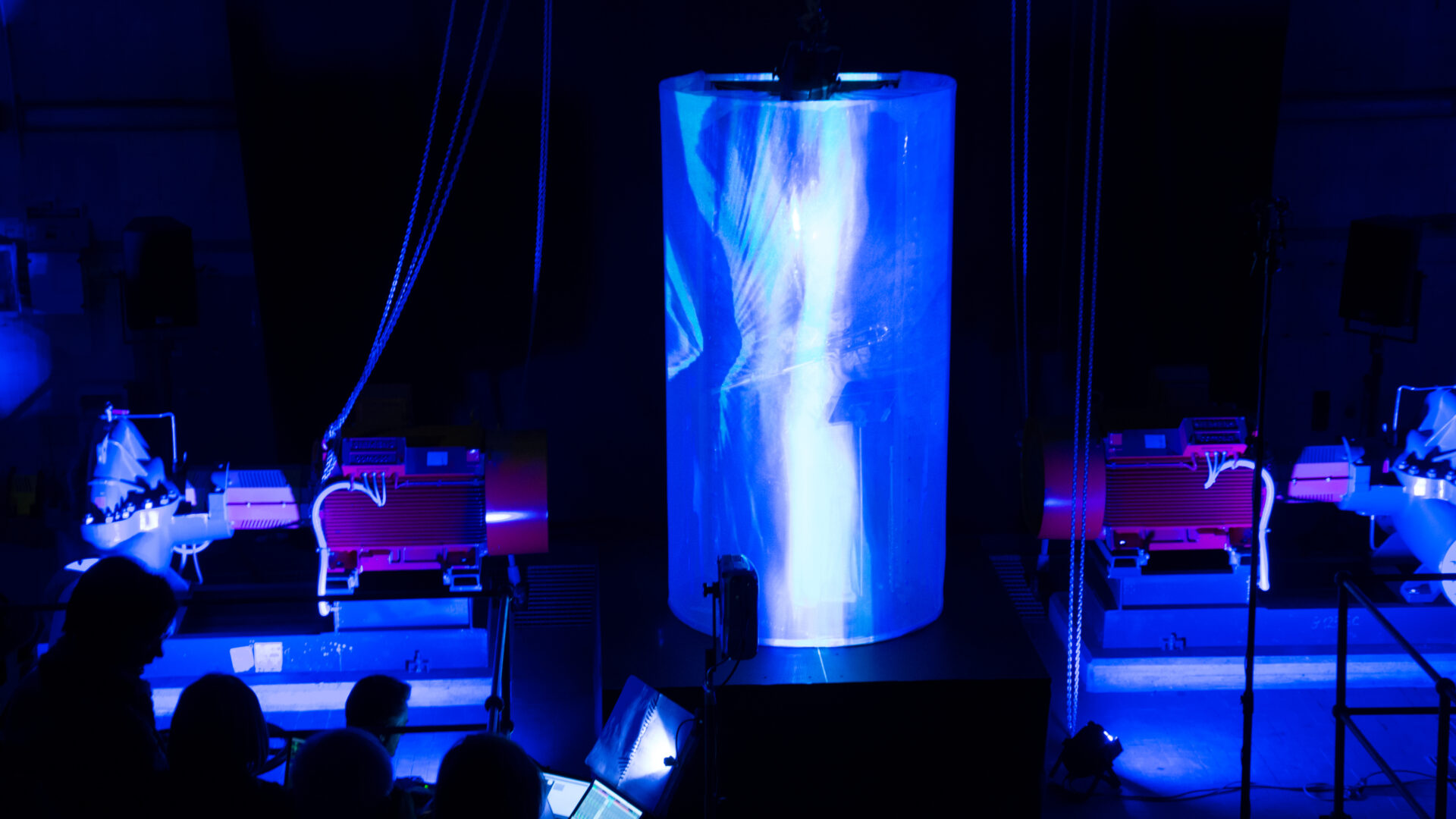 A project by Laura Faoro

BlueTube is an intermedia concert, blending contemporary music, electronics, videoart and multimedia site specific installation in a single performance. This project was defined “intermedia concert” by the scholar Prof. Valentina Valentini (Università La Sapienza, Roma) after attending to the 2018 edition of the project, for Serate Musicali, on the occasion of for the grand opening of “Centrale dell’Acqua”, the new Water Museum in Milan.

A tube, where the flutist is imprisoned in, is in the center of the stage: water, sound, colours, images and the performer herself bring to life a post modern spell, on the tube and on the space, stimulating the spectator’s imagination and partecipation on multiple sensorial levels, in a poetic mix of videoart, soundprocessing and performance art.
Both in thematical and historical terms, the musical context is strictly linked to the flute, an indivisible appendix of the performer and her true voice as well. Repertoire goes from Debussy’s Syrinx to experimental/avant-garde music, with such composers like Stockhausen, Sciarrino, Fedele, Glass, Saariaho: a close dialogue with the dramaturgy of the images that alternates different methodologies like timelines, VJ, generative.

THE WATER, THE FLUTE, THE TUBE:

Therefore, crossing suggestions and languages, BlueTube embodies a complex links game around of the need of a communication media, where the scene itself (a giant portion of a water pipe enclosing the performer) acts as a callback.
The water, blue par excellence, is a vital element that needs to be channelled through complex water pipes systems.
The flute is a sonic metal tube, linked to the breath, another vital element; Kandinsky associates it to the blue (“Represented in music, sky blue sounds like a flute“, On the Spiritual in Art).
The tube is a place of sharing information electronically, every day more global and viral.

The pivot concept of this performance is the dichotomy “freedom-constraint”, explained in the contrast between movement and fixity of images, beween electronically enhanced sounds and sounds that may become noise or silence, between the elusivity even if constrained in channels and pipes. Finally, and more dramatically, the opposition between the freedom of the audience and the imprisonement of the performer, playing inside a projectional tube – the BlueTube – interacting with videos, in a never ending game of transparencies and opacities.

In Blue Tube Laura Faoro, with Luca Congedo (soundscapes and live electronics) and Fabrizio Rosso (videos) performs on the flutes some pieces carefully chosen from the contemporary music repertoire, related to the flute as a maker of sounds and magic noises (Come vengono prodotti gli incantesimi, S. Sciarrino), or like an aulos, the legendary pipe described in the greek myths (Syrinx, C. Debussy; Donacis Ambra, I. Fedele); or, on the other side, music inspired by water both specifically and metaforically (NoaNoa, K. Saariaho; Aquarius , from Tierkreis, K. Stockhausen); or, finally, to the water flowing into a intricate water pipe (Spire V, C. Saldicco; Arabesque in memoriam, P. Glass)
In the earlier versions of the projects, the perfomance has also featured other pieces by composers like Marco Betta (Osservazione del mare), Armando Gentilucci (in acque solitarie), Vittorio Montalti (Labyrinthes), Nadir Vassena (Come perduto nel mare un bambino).

Commissioned by Metropolitana Milanese in 2016 and produced by Metropolitana Milanese and Canone Inverso during World Water Day 2016, the event is divided in more performances, lasting about 40 minutes each, in a real water pipe plant built around 1900, a integrating part of the perfomance that allowed a total video and sound immersion of the audience. Technology is widely exploited but kept as hidden as possible.
The show has been replied at the end of 2016 at LAC (Lugano), OggiMusica swiss festival.
In 2018 BlueTube was staged on two days (two shows per night) for the grand opening of “Centrale dell’Acqua”, the new Water Museum in Milan, hosted by Serate Musicali, one the most important milanese classic music festivals.